"Once more I saw the evening star hanging like a solitaire from the pure front of the western firmament... Then would appear the woollen tents, low and black, of the true Bedouin, mere dots in the boundless waste of lion-tawny clays and gazelle brown gravels, and the camp-fire dotting like a glow-worm the village centre". Thus wrote the 19th century orientalist and explorer Sir Richard Burton in the foreword to his edition of the Arabian Nights.

For Bouchard, Arabian nights with the shimmering beauty and colours of sunsets, were an endless source of inspiration for his paintings. Ancient cities rising like mirages out of desert landscapes or the marbled modern architecture of Riyadh - Western influences offset by the mystical aura of the Orient. He regularly visits the Middle East but in 1978 he went to Saudi Arabia for two years, and in 1979 exhibited at the Riyadh Palace Hotel. He found being a stranger in a strange land, rather than a stranger in his own land, far more comfortable, freeing him from the shackles of British conformity imposed by what he calls "the English sausage machine. The system in this country tries to ensure you won't rock the boat... An artist is portraying a truth and so in certain societies is seen as a threat to the establishment ... Everything is in reality black and white. Grey ia a convenient colour we mix ourselves".

His book 'From Surrealism to Orientalism' (Immel Publishing London 1985) is a pictorial record of the influence of Arabia on his work. 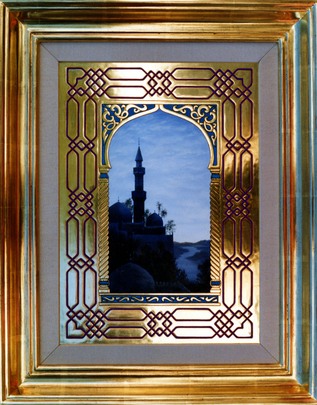 “I love the Middle East. It was there that I started to paint more classically. I had found the landscapes that I was looking for and discovered the beauty and importance of desert dawns and sunsets, and the wonderful light”.

There is an almost biblical quality about some of the images. Groups of travellers exploring the vastness of the desert, solitary dreamers gazing out over surreal horizons.

In 1980 Bouchard accompanied a group of archaeologists on a three-month survey through the South-West Region of Saudi Arabia. Sketching what he saw at the time and transferring the images onto canvas, he hopes one day to have built up a sufficient body of work for publication.

"Up until then most of my work had been totally from my imagination. Now however I was discovering a kind of surrealism in the stillness of the vast desert and the magic of the Middle Eastern light. All I had to do was to copy what I saw". 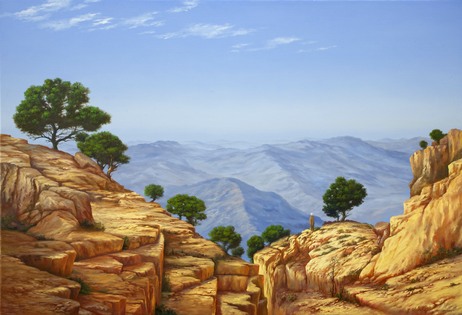 Like Byron's Childe Harolde, Bouchard was happy to make the desert a home for his art, for he seems most at ease when his brush is dipped in the Islamic palette. His full name is in fact Phillip Dahan-Bouchard ('Dahan' apparently means 'painter' in Arabic, though he prefers not to specify what kind of painter) and so the Middle East is in his blood as well as his paintings.

Detail from Dawn over Wadi Hanifa - 1979