ABOUT THE ARABIAN JOURNEYS 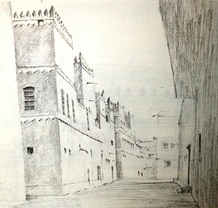 We left the Middle East for good when I was twelve years old. I did not return until I was twenty-six. I was then a young artist and had been invited out to Saudi Arabia by General Hashim Said Hashim who wanted me to paint pictures for him and who was to become a very important and supportive patron. It was 1978 and at the time Riyadh (where I was spending most of my time) was just beginning to grow into a modern city. There were still whole quarters in the centre of town where the old mudbrick buildings of the past remained intact, but people were opting for the convenience of moving to more modern areas.The architectural past was being abandoned and I took the opportunity to visit the old parts of town with my sketchbook to record this fast disappearing past. On occasion I would be invited into houses, even given tea, and was always made to feel quite welcome. Arabian hospitality is a wonderful experience.

I was meant to stay there for about four weeks but in the end remained for two years and so began a parallel career as a latter-day ‘Orientalist’.

Having grown up in the Middle East it is the place which for me feels very much like ‘home’. Today I still continue to produce paintings of Arabia ( though obviously not as often as when I was travelling a great deal to Saudi Arabia) and I see myself as a recorder, mostly, of what could be referred to as ‘historic Arabia’, land of ancient traditions and sunsets. It is a truly magical place.

The atmosphere of the Middle East is unique to itself and it possesses a timelessness all of its own. I was born in Egypt as my father was a diplomat and Cairo was one of his first postings. There is definitely something about the world of ‘Arabia’ that permeates to the very core of one’s being.

A Palace on the outskirts of the old city. (Sketched in 1983) 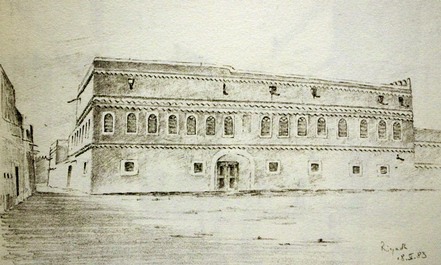