Bouchard loves classical architecture and performing magic tricks, both on and off the canvas, and it is the fusion of the two which pervades many of his pictures. He is happy with familiar objects which are both solid and visually comfortable. He then places these objects, be they chess squares or playing cards, in a dream setting. He weaves a fantasy out of recognisable landscapes. It is the world of his imagination, but if we are happy with the objects he has taken to his desert island we are welcome to join him.

It is the world of his imagination, but if we are happy with the objects he has taken to his desert island we are welcome to join him.

Mention Bouchard to art critics, scour the reference books, and you will probably draw a blank. Bouchard is both blessed and burdened by his relative anonymity. Bouchard the bank manager would doubtless love mass exposure and mass production of his work to fuel his family's quality of life and feed the hungry surrealists and orientalists. As a talented linguist - he speaks English, French, Spanish and some Arabic - with a cosmopolitan palette, he can satiate different cultural appetites. One suspects however that such popular appeal would not satisfy Bouchard the aesthete.

In 35 years Bouchard has produced just over 450 paintings. Most of his work is commissioned and several of his patrons, mostly successful businessmen, have more than a dozen of his pictures in private collections - testament to the enduring, yet protean quality of his work, and the unique rapport he has built with his clients. The private collections hang in England, France, the United States, Japan and the Middle East. One patron in Saudi Arabia has over 30 works of Bouchard. The artist is naturally grateful for their continued support. It is the affirmation that his patrons hear what he is saying but can weave their own interpretations into the canvas.

Bouchard, as a critic, admits he finds modern art incomprehensible, but as an artist knows it is impossible and wrong to ignore it.

By contrast, structure and form are vital components of Bouchard's work, providing the comfort of a security blanket should the journey through the visual depths of his landscapes prove too frightening or lonely. He suspects this need for order and stability, without getting too Freudian, stems from his childhood. He was born in Egypt in 1952, and his parents were in the Diplomatic Service. His mother is French and his step-father, Sir George Middleton is English. At the age of eight he arrived in England for the first time and was sent to prep school.

"I hated prep school and I believe it left deep marks. I could hardly speak a word of English when I arrived and I remember this feeling of complete isolation, which is what many of my paintings seem to be about".

Bouchard then went on to Downside Public School, where he enjoyed happier days, before obtaining a degree in French at London University. Travelling the Middle East with his parents, picnics in the desert in the shade of ruined fortresses and living in places like the Lebanon and Bahrain gave Bouchard the explorer the taste for travel, but he was like a ship without an anchor, a king without a castle.

At the Adrian Mibus stand, Bouchard with Laurence Quellet at the 1991 International Contemporary Art Fair at Olympia.

Professionally though, Bouchard has no cause to regret this early introduction to the Middle East. It is a place where Bouchard and his imagination feel most at home and the influence on his work most profound. The king had found his castle.

It is a mixture of accessibility and mystery which intrigues. Many of his paintings are elaborate stages with props but no players, or gilded books with scenes but no stories.

Open this book and sit the children at your knee. Like C. S. Lewis you can transport them through the wardrobe door into a surreal adventure. Bouchard is the stage manager, you the actor or director. There are dangers but reassurances too; chasms and cliff tops, lamp posts and letters. 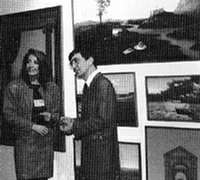 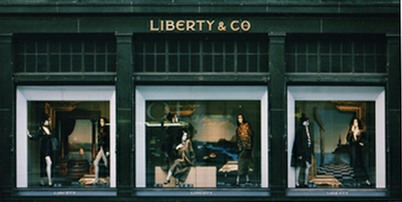 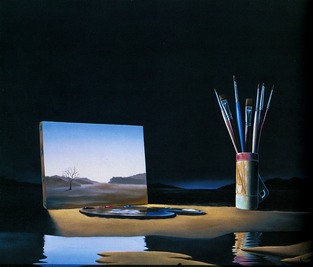 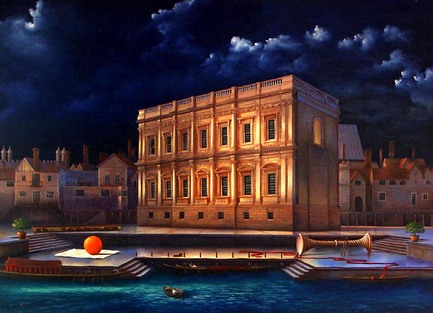